As much as I would love to be able to say that I am Elsa from Frozen, with her emotional angst about being a good girl, wanting to be free and being scared of things getting out of control, I think I may be a bit more of Anna. I mean, I definitely struggle with some of the stuff Elsa struggles with, but don't we all?

But some of my embarrassing moments are embarrassing enough, that they definitely put me in the "Anna" category. :P

So! I've decided to share with you some of my top Embarrassing moments. If you're having a bad day and feel like you're potentially the most awkward human being that ever lived, I'm about to prove you wrong. And if you're having a wonderful day, I hope these will make you chuckle.

1. I was playing a big game called Gorgon with a large group of people one evening. I was running and someone pushed me from the side. I tripped but kept running, trying to maintain my balance, kinda looking like a football player, with my head down. I wasn't looking where I was going and managed to headbutt a guy in the crotch.

2. I was on a recreational baseball team during the summer for a few years. One night I was unfortunate enough to have to be back catcher. I put on the padding and the helmet and went to stand behind home base. The helmet smelled awful. It smelled like walnuts, but sweaty walnuts... if you can imagine what sweaty walnuts smell like. The inning ended and I returned to the dugout. To my team, mainly made up of teenage guys, I proclaimed loudly in disgust, "The helmet smells like nuts!" My whole team burst out laughing. They spent the rest of the evening asking how I knew what nuts smelled like.

3. My little brother was questioning one of my guy friends about what instruments he could play, asking if he sang opera. My friend replied, "Yeah, in the shower." For some reason, the "in the shower" part didn't register in my head and I snorted, saying "I would pay money to see that.", thinking of him singing opera. Cue awkward moment where he's looking at me awkwardly and I'm confused as to why everything got awkward. Then everything sunk in and I spent the next five minutes trying to explain that I didn't want to see him in the shower.

5. A few months ago, I went to go see Frozen with a group of my cousins. It came to the part where Hans has to kiss Anna. The whole theatre is silent, on the edge of their seats. Hans leans in and then says "Oh Anna, if only there was someone who loved you!" I don't know why I found it so surprising,  but for some reason, I was completely taken off guard and my cousin and I gasped so loudly that the people around turned to look at us, glaring and shhing us. *Ducks head and hides in shame.*

6. My friend and I went over to one of guy friend's houses for dinner with his parents. We arrive, walk into the dining room and all sit down. Of course, with my luck, I manage to sit on a lightbulb. Yes, you read that correctly, a lightbulb. There was a little lightbulb on my chair. It broke, they realized what had happened and began to apologize profusely and ask if I was all right. But the night doesn't end there. Afterwards, we all went to get ice cream and I managed to drip it allll down my shirt. My guy friend's mum was like, "Oh! We can get the stains out for you!" I didn't realize she meant she was going to take my shirt and wash it. So I spent the rest of the evening in my friend's oversized, plaid, dress shirt.


I hope these have brightened your day and made you feel a little better. We all have incredibly awkward moments, it's just about moving on and learning to laugh at them. Do you have any incredibly embarrassing moments?

Photo of the Day 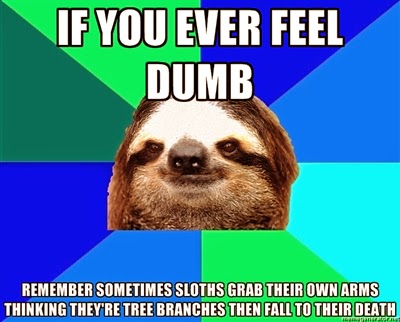