His dirty blonde hair is long and he has part of it in a ponytail behind his head. There's a big, bushy beard on his face. He's wearing a blue Hawaii shit.

He really isn't much to look at. The hair isn't very well groomed. He's probably in his sixties. He walks with a stride that has seen many years.

It's his eyes that are captivating. Behind the slightly brutish appearance, he's got beautiful, intelligent, deep, sensitive eyes. He's quiet and walks with a slight slump.

Maybe he's a teacher. He looks like he could teach. The wisdom wrinkles on his face are clear to see and I wonder how much he's seen. How much happiness. How much love. How much pain. How much despair. He could be a university professor. He'd teach philosophy of course. He'd be the one that everyone loved. You know, the kind one. The smart one. The sensitive one.

He's all alone and I can just hear his voice as he orders a potato skin stack over the chatter of the carnival stalls around me. It's soft and smooth and suddenly I can picture him with a guitar, singing songs about suck lock and driving a pick-up truck.

The lady behind the stand hands him the deep-friend potato stack and he walks away with a crooked smile on his face. I can hear him chuckling a bit.

So, to the man with the old eyes, I hope you enjoyed your potatoes.

52 Thoughts I Had While Rewatching Disney's Pinocchio

I'd like to start this post off by saying that I hadn't seen Pinocchio in over five years when I watched it... it's a little different than I remembered it. So, without further adieu, here is my train of thought during Pinocchio.

1. Why does Jiminy Cricket have a hillbilly accent? Isn't Pinocchio German?

2. Why did Geppetto give Pinocchio no mouth?

4. Ooh, the fish and the cat don't like the name Pinocchio.

7. Ah yes, an alarm clock where the alarm noise is a child screaming while his mother spanks him. Lovely.

8. That pipe is literally as long as your arm, Geppetto. I'm concerned.

10. I'm pretty sure the Blue Fairy is just Snow White with blonde hair.

12. How are two foxes walking around and no one notices? Yet people notice Pinocchio is wooden...

13. I'm convinced the cat wants to be human and that's why he's jealous of Pinocchio.

14. For being a conscience, Jiminy's not very noble or good.

15. Lol, the cat/lion/fox/human thing is so stupid.

16. Yeah Pinocchio, don't be an actor. There's no money in that. Go to school.

17. How has Pinocchio become so famous in like 30 seconds?

18. Poor Pinocchio. All these girls want him and he looks terrified.

19. The show runner just locked Pinocchio in a cage!

22. The dolls are hanging by their necks and the lightning keeps flashing on their smiling faces. This is creepy. How is this a children's movie?

23. Poor Geppetto. He's all alone in his bathrobe in the rain trying to find his son.

24. How does a puppet blow his nose? What does he get? Splinters instead of boogers?

26. How did his nose grow birds? Maybe he gets birds instead of boogers.

27. Ooh. His coins are bigger than the show runner/director's. Take his, fox people.

30. Let me get this right. He's collecting stupid boys to take to a place called Pleasure Island where they never come back as boys. Please tell me I'm not the only one whose mind is going some place it shouldn't. 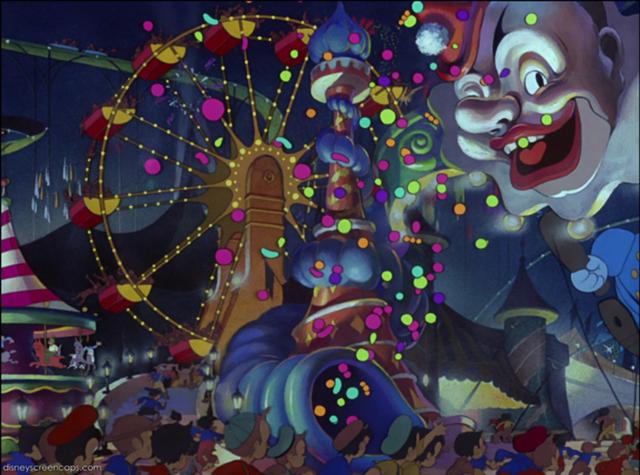 33. "Come here and smoke your heads off!" Who decided this was an appropriate movie for children?

34. "You buttered your bread, now sleep in it." I don't think that's how that phrase goes Jiminy.

35. The stupid-boy-collecting man is turning the stupid boys into donkeys. Okay. That's not what I was expecting.

36. The real question is, why are there no girls here? Answer, because girls aren't this stupid apparently.

37. Oh, we're in trouble. Pinocchio's turning into a donkey.

41. Oh, he was swallowed by a whale. Of course. I should have seen that coming.

42. Pinocchio's going to drown himself to find the whale at the bottom of the sea. Right. That's logical.

43. Now he's dragging the rock that sunk him around with him. Is this supposed to be symbolic?

45. "I never though it would end this way. Starving to death in the belly or a whale." I can't imagine many people would think it would end that way, Geppetto.

46. They're literally making a fire in the belly of the whale just for the purpose of making it sneeze so they can get out. How stupid are these people? Why is the whale not burning on the inside? So many questions!

48. "Oh no! Now he hates me!" Well if you wanted him to like you Geppetto, maybe you shouldn't have set your boat on fire in his belly. Not the best way to make friends.

49. No! Pinocchio's dead (although I'm a little confused as to how. Can't he breathe underwater?)

50. Oh please! You're going to save him? He hasn't been selfless, brave or true! He's been a brat. A little different than I remember.

Okay, a lot different than I remember.

Moral of the story: Stay in school kids.

So as you've probably read, I've finished high school (yay), and been accepted into a five-month program starting in March (yay 2x).

However, as you may notice, it is only February.

I don't start the program until the 7th of March, which gives me almost a month of no school or work (gasp).

Now what could I do with a whole month....

About halfway through January, I decided that one of things I wanted to do this month before I left home, was to watch all of my favourite Disney movies in chronological order of when they were released. Now, I started to make the list and realized that it was just way too long for me to finish in a month. I like too many movies. Oops. So I had to narrow it down to movies released 2000 or earlier, and they all had to be cartoon.

And then I thought, "How can I make this into a blog thing? Because this really feels like this could be a blog thing." And I came up with the idea to do a "30 (or 40, or 50, doesn't really matter) Thoughts I Had While Watching ___________" post for each of the movies I watch, complete with gifs if I can find them. I'll scatter these with other posts as well, otherwise I think you and I would both go crazy.

Here's the list (in order because it's me, so of course it's in order):


I hope you all will join me in rewatching some of the greatest cartoon movies of all time. What are some of your favourite Disney movies? Did I include them on my list?

(Do y'all like the new theme? Still not sure if I'm happy with it. Be prepared; it may change. Ten points if you can name where the background image is from)

I am officially done high school. Forever and ever. Amen. That was exhausting.

And I got early acceptance to one of my back up Universities.

And yesterday I got an interview to one of my first choice Universities AND I got accepted to a 5 month school I'm doing from March to July this year.

And I only have 33 more days before I officially move out. Like out of my house. To do.... adultly things.

Wow, that sounded much more inappropriate than I meant it too.

I'm just looking back at posts like Looking for a House in Neverland and realizing how far I've come. I'm an adult now. Like a legit, proper, legal, age of majority in Canada adult.