Day One Of the Alphabet Challenge!

Welcome to the first post of the alphabet challenge (which I have decided is an incredibly stupid title that sounds like it would appear on sesame street, any brilliant ideas for a new name?)! For those of you who didn't see my last post, I'll briefly recap. 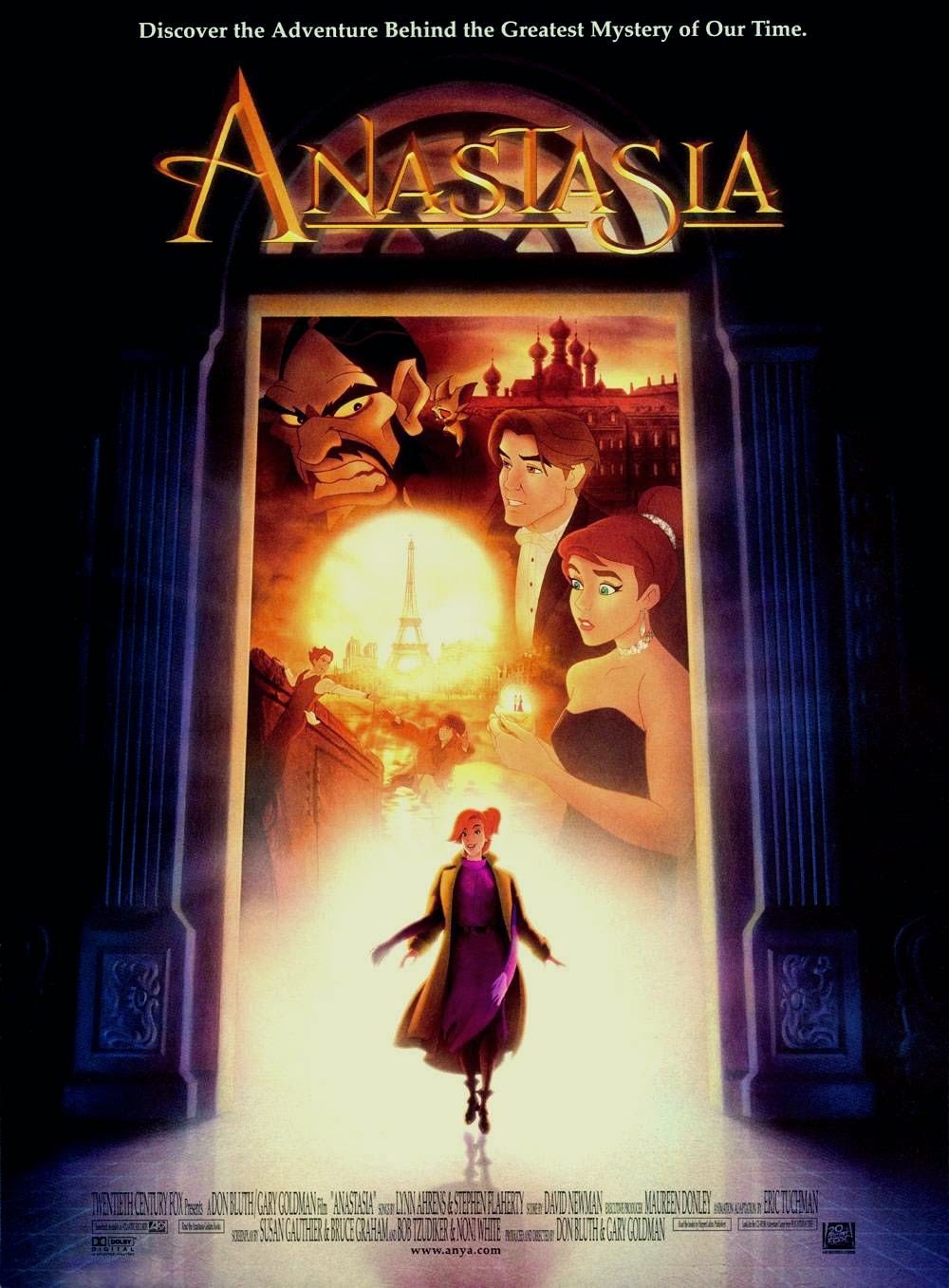 This movie is one of my top five favourite cartoon movies. And that's saying something since I love so many cartoon movies. It has a great relationship that isn't sickening sweet where they fall in love at first side, a great soundtrack, an entertaining villain and feel good feeling at the end. Pretty much nothing like the actual story of Anastasia. :P

The story starts at a ball in the palace with Anastasia and her family when Anastasia. That evening, the palace is attacked and her entire family except her grandmother is killed in a fire, started by the villian Rasputin. She gets separated from her grandmother and grows up not knowing who she is. Ten years later, she decides to try and find out who is she is, following the only clue she has, which is a necklace that says, "Together in Paris". So she goes to Paris. All this time, the grandmother has been looking for her grand-daughter, offering a huge reward for whoever can find her. Meanwhile, there are these two con men, Vlad and Dimitri who are trying to find a girl who can play the part of Anastasia so they can get the money. Then they run into Anastasia and get her to play the part, but no one knows who she actually is. Dimitri and Anastasia constantly clash. As she is being taught how to be Anastasia, she starts to remember things, without knowing why she is remembering these things. Meanwhile, Rasputin has found out Anastasia is still alive and is trying to find ways to kill her. And because I am awful at cliffhangers and trying to trail things off so I don't spoil anything, I'm going to not say anything else and stop here. :)

Dimitri and "Anya" are one of these couples. I love their banter and their slow journey from despising each other's guts to being in love. They just, I just, gahh. And it helps that Dimitri is attractive too. :)

Like I said, the villains in this movie are quite entertaining. The main villain, Rasputin, is perfectly evil. Imagine a rotting Jafar. And like in most cartoon movies, he has the best song. Why is that? Why do the bad guys have the coolest, most intense songs?

The villain's sidekick, Bartok, is really one of the best comedic relief characters ever. He's like one of those sidekicks that really isn't evil, just adorable.

I actually love the character of Anastasia in this movie. She's not like most cartoon/disney princesses. She's smart and knows her way around. She's inquisitive and curious. She doesn't fall for Dimitri right away. She speaks sass and sarcasm fluently. She's strong and brave, but isn't afraid to feel emotion or admit to being weak. I think we need more cartoon princesses like her.

So there was A! I hope you enjoyed my rave. I strongly encourage you to watch this movie if you haven't already. It's one of my all time favourites and really amazing. :)