Couldn't Have Been Better

Do you ever have one of those days that just goes so perfectly that you can't imagine how it could have gone any better? Last wednesday was one of those rare beautiful days. I'd been volunteering at a theatre camp for kids aged 8-13 the previous week and then that week from 9-4 every day, so my perfect day started with sleeping in until 10:30.

Around noon, my mum and I got on a bus to go down to Toronto, an agenda for the day in our minds. First, we'd look at where I'd be going to film camp/school in August, then look at my top University choice, Ryerson. After, we'd spend the afternoon walking around downtown Toronto, go out for dinner and then go to see Marianas Trench at Nathan Philips Square.

We started at this place called Honest Ed's because being the snowman I am, I needed sunscreen if I didn't want to resemble a tomato lobster at the end of the day. Two warehouses long and three floors tall, it was like a giant flea market/dollar store. The whole time we were in there I just thought, "I'm definitely coming back here when I need to go dorm/apartment shopping." 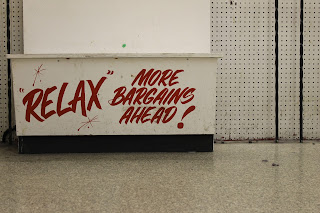 After Honest Ed's, we subway-ed over to Ryerson to look at the campus, which I thought was pretty cool. We stopped for coffee in one of their little cafes.

After we left Ryerson, we had most of the afternoon to just hang out, walk around and take in the city.


And it just so happened that whilst walking down a wonderful, blessed street called Queen's street, I see two people casually eating sushi outside the restaurant. I pause. Gee, they look awfully familiar. My heart stops when I realize who they are. Mike and Ian from Marianas Trench. Sitting there, eating sushi. In the middle of the afternoon. Casually, as if they have no idea they are part of one of the coolest bands in the world.

"Mum, those guys are from Marianas Trench," I nudge her.
"What? Really? Where?" She begins to look around.
"Behind us."
"Do you want to go say hi and ask them for a picture?"
"Yeah."

Slowly and fairly nervously, I approach them. We meet them and talk for a few minutes. We talk about Pop 101, one of their songs that we love. They ask where we're from and we tell them. Miraculously, they actually know where it is. My town's pretty small. I ask for a picture and they oblige happily. 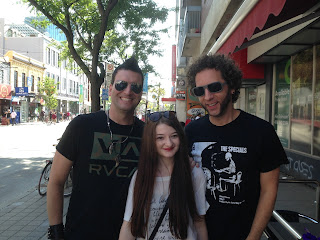 And I shook wildly for the next hour as I tried to regain any sense of sanity still left in my brain. They were so nice!

Next, we went to have dinner at this place called Marche's, which is kind of like an indoor supermarket of restaurants. That's the only way I can think of to describe it. 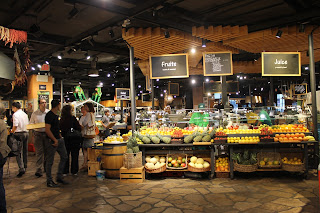 Then we walked over to Nathan Philips Square to get standing space so the band didn't look like ants.


In the end, I was super happy with where we were and as you'll see in the pictures below, we were pretty close. I have like over 150 pictures, so it was pretty hard to narrow it down to nine. ;) They were incredible and I would definitely go to see them again. In fact, I am in October!


It was such an incredible day. One of those days when you're just super happy to be alive and here on the planet. Ooh! And bonus, I didn't get sunburnt. Not even a little.
Posted by Sarah at 3:00 PM