Along for the Ride

I've only noticed now that I've started almost every blog post with this greeting. Haha, I'm just a liiiiittle slow.

Yesterday was a fairly long day. I didn't get much sleep the night before due to a cold I've been fighting and then I had to work from 9 to 5 at the library, which admittedly, isn't the worst spot to work for a book lover. ;)

Lately, as I've mentioned, I've hit a bit of a book block, I just can't find a book that really captures my interest. But I now have a fairly good sized list of new books thanks to all of you beautiful people and some of my friends. Today I took out 'Along for the Ride' by Sarah Dessen. I'm sorry to all the Sarah Dessen fans out there, but she really doesn't do much for me. I've read 'What Happened to Goodbye', 'This Lullaby' and 'Just Listen' and found that her books are fairly... flat, in my opinion, which is why I was doubtful when a friend recommended I read 'Along for the Ride'.

But it was on my cart to shelve and I didn't have any other new reading material, so I figured why not. I took it out and figured I would read it later that evening.

I actually really, really enjoyed it. I'm not going to try and review it because I either end up giving you all way too much information, or deliberately try to avoid giving a lot of information which then results in a very vague awkward paragraph. So I'm just going to give you my opinion and go from there. But be warned that I might end up giving you spoilers. I swear it's not on purpose!

So the basis of the book is this girl goes down to visit her father, her stepmother and their new baby. Her parents had split a few years back and due to the amount of pressure on her to do well academically and the responsibility she felt for her parents' fighting and eventual split, she never had the opportunity to be a child or teen. Because of the stress she continually feels, she's an insomniac. She goes down to visit her Dad for her summer and meets people, namely Eli who is also an insomniac due to some issues of his own. They bond over their inability to sleep and together they recreate a childhood for her...ish. So that's kinda the book in a nutshell.

The reason I really liked it was because I found the characters had depth in this book. I didn't feel like I was reading Cinderella with a faceless prince for the billionth time. Eli isn't perfect but he's not the  'bad boy'. He's a normal guy who's had issues and comes across as genuine. Auden (who's the main character. I don't think I mentioned that. Oops) isn't a damsel in distress who can't do anything for herself and she isn't the perfect 21st century strong, independent, young woman who "doesn't need no man." She's hurt and broken but real.

Their relationship as it develops is... different. Has anyone ever read 'Dash and Lili's Book of Dares'? It kind of reminded me of that. They bond over the oddest ways. Like, when he learns she's never been bowling and they bowl at 3 am. Or when she says that she's never had a food fight and they do that too. When she ends up having a breakdown one night, he doesn't sooth her with his 'beautiful words' or 'gentle kisses'. He's just there listening to her cry and telling her that it isn't her fault. When he deals with his pain from his past, she's there for him as well, not as a lover or fairy godmother, but as a friend.

Oh! Oh! And they don't sleep together! Boom! I'm sorry, that's a big pet peeve of mine. I hate reading books where these seventeen year olds know each other for like maybe a month and are madly in love and then end up sleeping together.

She doesn't change her dreams for him. She still ends up doing what she was planning on doing at the beginning of the summer and they still keep in touch.  There was still crappiness at the end in both their lives, they knew things weren't going to be perfect but they were willing to keep going. And maybe even get some sleep.

I don't know, I guess I was just taken away by the realness of this book. I like reading real things. Real things make me happy. 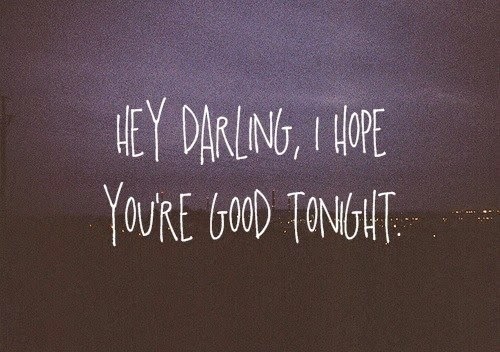 This picture continually shows up on my Tumblr dashboard and every time I see it I think, "I really like this picture. I should grab it and save it to my computer." And I finally did it! Gold sticky star for me!
I don't know if it's the colours, the font of the words, the actual photograph or the use of the word 'darling' (which I absolutely love), but something about this picture just gets to me. There's no particular reason why I'm sharing it other than the fact that I really like it.