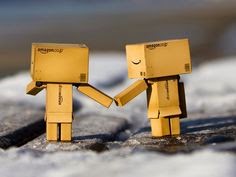 Her manicured fingertips toyed with the box people he had loved. They had created them together last summer one sticky day, she the tall one, and he the little one. Then a gun. They said it was over quickly. For him. Her tears hit the cardboard heads; sobs hit his bare walls.
“You’re a pretty cool sister.”
She smiled.
“Thanks. You know, you’re pretty cool too.”
People said once he became a teenager, he would grow distance. She’d never be able to find out.
She knew she had to move on. Guitars, posters and figurines had all made their way into the garage sale pile. Not these boxes. She couldn’t just let them go to a stranger.
Leaving the house, she went to his music school, past the brick wall to where his hidden spot was. He was the only one who knew that there were remnants of a paved walkway beyond the elderberry bushes.
Carefully, she placed the little people down on a pavement stone, their little arms touching, as if holding hands.
“We’ll always have each other, right?”
She grabbed his hand.
“Of course, bud.”